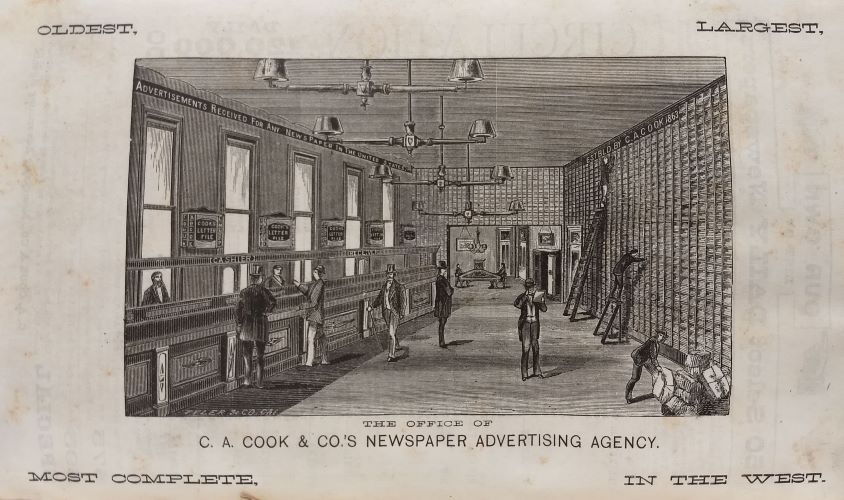 This is a small and unusual dataset, but it’s one that I like and learned a fair bit from: an advertiser’s annotations of a 1876 edition of C. A. Cook & Co.’s United States Newspaper Directory now held at the American Antiquarian Society.1

Newspaper agencies were a major go-between for advertisers and periodicals in the postbellum period, promising advertisers less hassle and publishers more reliable ad revenue streams. By the mid-1870s they published annual directories of the country’s newspapers, usually with a short record of political affiliation, genre, publisher, estimated circulation, and even short descriptions of the local population, all to help businesses choose where to place their ads. Rowell’s and Ayer’s directories achieved prominence as the most complete, but there were always competitors even as other forms of advertising agents and venues arose over the late-19th and early-20th centuries. (Many found their market niche by promising to provide more detailed information about fewer papers or stronger relationships with a particular region’s periodical press). Cook’s was one competitor out of Chicago.

Most copies of these directories that one comes across today were acquired by libraries or archives at the time of their publication as reference volumes – a use more in keeping with the original aim of the earlier, booster-y directories whose format the agencies adopted.2 Scholars owe much of our knowledge of the sheer volume of periodical print and estimated circulations to these directories, whose compilers at least strove for consistency even if accuracy remained something of an ideal. But directories were still working guides for would-be advertisers.

This is what makes the dataset unusual. I have no idea who owned it or what they advertised. I don’t even know if they actually went through with placing the ads, let alone if this selection was their final – though erased marks suggest that it was at least a revision of an initial attempt. What I do know is that in the late 1870s and surely somewhere in Illinois, someone decided at some point in the process that placing ads in this group of newspapers would be a good advertising strategy. And that, I think, is instructive in itself.

The file is largely self-explanatory. Circulation is the number as reported by Cook’s; it is almost certainly inflated and it may differ slightly from other directories. Class is either a political position or a genre; I’ve somewhat consolidated several of these from Cook’s more specific classifications, which are retained in Subclass.